How old were you when you knew you were straight? I had a crush on Danny Rollins in kindergarten. And then a sandy-haired student teacher named Mr. Hansen came along, and Danny was toast. At that age, I either loved boys or kicked them in the shins.
CNN anchor Anderson Cooper says he first knew “something was different” around the age of 6 or 7. “I’m not sure I knew the word ‘gay’ at the time, but I realized something was up.” Imagine being a kid with questions, and you live in Florida, where asking a teacher could get them fired. 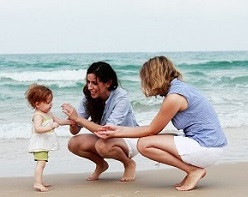 Does that sound like hyperbole? HB 1557/SB 1834, the “Don’t Say Gay” bill, would prohibit classroom discussion about sexual orientation or gender identity through the third grade. Parents can sue for damages—in a legal system already stretched beyond its limits. This vague law purports to be about parental rights. What if your parents are gay? In Florida, it’s perfectly legal (and admirable) for gay people to marry and/or adopt. But now, our state wants to prohibit any mention of that fact in school until a kid turns 9. Any of you with kids—how many questions do they ask in a day? How curious do they get about things you don’t want to talk about? Kids are smart. It’s the adults I worry about. Some of them seem to think it’s dangerous to teach kids to be decent human beings.
GOP leaders want to go one step further with their censorship agenda by passing the “Stop WOKE Act,” which would prohibit work discussions of racial or gender discrimination. It would allow a white employee to sue for discrimination if he didn’t like what you, the business owner, wanted to say about fairness in the workplace. Apparently, constitutional rights only extend to the second amendment.
Of all the problems Florida is facing—traffic, housing, healthcare, tainted drinking water, pythons taking over the Everglades—is this how we want our elected officials to spend their time? Gov. Ron DeSantis has already pledged to sign these bills when they cross his desk. Please contact your representatives and let them know how damaging (and let’s hope unconstitutional) these laws would be.
Gov. Ron Desantis: (850) 717-9337
Senator Marco Rubio: (407) 254-2573 or (866) 630-7106
Senator Rick Scott: (850) 942-8415
To Find Your Florida Representative: Click Here
at March 01, 2022