Carpe diem (and what was your name again?)

Life is what happens when you’re busy doing other things.
—JOHN LENNON

Please accept my apologies for a subject that’s bound to be depressing. Getting old sucks. Still, if we couldn’t laugh about it, there’d be no point. Let me explain. 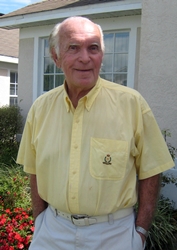 The man is alone in the world. He just wants to go home.

We met Andy 15 years ago when he bought the house next door. We never knew much about him, only that he’d worked in mall construction in Pittsburgh, had once served in the Air Force. He was always a stubborn cuss; things were always better Up North. He waged a constant battle with weeds—you could tell he’d launched another Roundup attack by the yellow craters in his grass. He blamed the spread on our laissez-faire attitude. (“At least our weeds are green,” we said.) One day, Andy mentioned that his wife had died in 1988, that she’d been diagnosed with breast cancer and had contracted HIV from a blood transfusion, one of the earliest cases on record.

Okay, I thought, so he has a right to be mean.

We kept a healthy distance, and that suited him just fine. Once or twice a year, Andy would ring the bell and say, “I’m leaving for Pittsburgh in the morning. I don’t trust the dentists down here.” And off he would go. We’d see his car in the driveway a week or so later, knowing he’d returned safely with a new crown. After the hurricanes of 2004, when he offered to let Graeme borrow his chainsaw, we understood the honor he’d bestowed.

After his last trip to Pittsburgh, we knew something was wrong.

Andy called a lady friend from Jacksonville, where he’d been circling the beltway for hours. Could she tell him which exit to take? A state trooper found him; the friend brought him home. Okay, we thought, so Andy can’t drive long distances anymore. He’s getting older. It happens.

As Andy had always predicted, the weeds took over the strip between our sidewalk and the street, so we bought new sod. “Run your sprinklers tonight,” the lawn guy said. “Everything will turn nice and green.” Nope, we thought the next morning, definitely yellow. Our new sod was dead. The lawn guy almost cried. Then he pointed out the matching ring of yellow around Andy’s house, and the empty jug of Roundup in the trash.

Just then, another neighbor stopped by to survey the damage. “Andy said your husband killed it,” he told me. “He said, ‘That guy never could take care of his grass.’ ”

And then we knew. I’d volunteered for the Alzheimer’s Respite Program; I’d watched my grandmother vanish. Andy’s exit was long and slow. He managed on his own for longer than we expected. We worried, of course, about his driving, about the guns in the house. One day, Graeme offered to “borrow those rifles and look them up on the Internet, see what they’re worth.” Andy agreed. Knowing nothing about guns, Graeme added, “Just make sure this one isn’t loaded.”

“It’s not, see?” Andy said, and blew a hole in his mattress.

This week, we toured assisted-living facilities. Andy went with us; he doesn’t remember a thing. He knows he needs help. He admits he’s lonely. But he doesn’t want to live in “a place where people go to die.” And yet, he has no choice. When the nurse asked about his hearing, Andy answered, “What?” with a sly grin on his face. When the director who’d shown us around for two hours came back with some papers, Andy introduced himself.

I reported his condition to the DMV months ago. The letter suspending his license came in the mail last week. Andy showed it to me, devastated. He begged me to fix it. “I don’t know what I’d do without you,” he said. Oh, and by the way, he’s leaving for Pittsburgh in the morning.
at March 09, 2012 No comments: