I was a journalism major. My first real job, after waitressing, was at the Rittman Press, a weekly newspaper in rural Ohio. I was the only full-time reporter, a lot of pressure. As we’d been taught in school, I followed the rules: find two sources, verify everything, double and triple-check my information. Some sources were more reliable than others. A photo was better than a statement. No one could argue with the facts.

Fast-forward 40 years, and I’m being told by family members that my facts aren’t real, and I’m an idiot for believing them. This headache never goes away. I can’t for the life of me understand how we got to this place.

Here’s what I want to know. Officials in every state have certified the election. Representatives from both parties, and monitors from every walk of life, studied the ballots and signatures and deemed them valid. Courts reviewed 59 charges of fraud and dismissed them out of hand.

One judge, a Trump appointee said, “Free, fair elections are the lifeblood of our democracy. Charges of unfairness are serious. But calling an election unfair does not make it so. Charges require specific allegations and then proof. We have neither here.”

But you think a bus pulled up at a polling place, stuffed with fake ballots, and every single person in the chain of command went along with it? Where is this flawless operation in every other phase of our government? We can’t even dole out vaccine shots. My dad used to be a poll volunteer. He would have decked anyone who tried to cheat. It meant that much to him.

If this election was rigged, why are members of Congress fine with their results? Shouldn’t we throw out their votes too? Could it be they’re using this fiction to raise money? It’s estimated that the Trump campaign and allied GOP groups have raised at least $497 million since he lost. 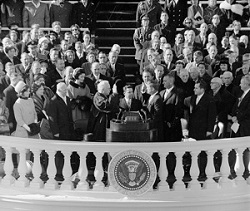 Why on earth would Joe Biden want to be president, given the abysmal situation he’s inheriting? A $27 trillion debt. A raging pandemic. Record unemployment. A country at war with itself.

I’ll be honest. Four years ago, I couldn’t stomach the thought of “President Trump.” His attitudes toward women, immigrants, minorities, the press, disabled and LGBTQ people were disturbing. Not what I wanted for the leader of our country. But as someone told me, “Sometimes you have to hire an assh*le to get the job done.” My dad said, “Don’t worry. He’ll surround himself with good people.” You know why I suspended my judgment? Because so many of my friends and family—people I respected—thought he was a good guy.

A good guy who cheated his contractors, cheated his tenants, cheated charities, cheated veterans at his fake university, and cheated on his wives, but okay.

“When someone shows you who they are, believe them the first time.”

This president has a habit of lying. This is well-known. His supporters enjoy it, I think. He’s playing a game, and they’re winning. Unfortunately, he lost this last election. This is also well-known. But because he couldn’t admit to losing, he lied for two months. The election was only fair if he won. What second-grader wouldn’t recognize this tactic?

He couldn’t win through voter suppression, slowing down the post office, and disqualifying mail-in ballots during the most deadly pandemic since 1918. He couldn’t believe he lost, because all of his tricks didn’t work.

Is it divisive of me to spell out the facts? “Agreeing to disagree” doesn’t fly anymore. I can’t give equal weight to complete fabrications. We were taught to be polite to people with different views, and that worked for most of my life, until Facebook came along. I miss the old days, when I didn’t know my Christian neighbors were kinda racist.

A Trump supporter recently told me she’s afraid of losing our freedoms. I agree. The Capitol is locked down so tightly right now, it looks like the Green Zone in Baghdad. She says she’s fighting to protect our rights. As Americans, our rights are protected by the Constitution. Which this president has done everything in his power to undermine.

Tomorrow, we inaugurate a new president. This has happened every four years since 1789. Sadly, it won’t happen with the same pomp and circumstance, due to the death threats from the ex-president’s fans. How do we move on as a nation, rebuild our economy, fight this virus, put people back to work, when half of the country thinks the other half is trying to destroy it? How can this be? We all want the same things: safety, security, peace. Freedom to live our own lives. If your first reaction just now was to think of all the ways the “other side” is doing the opposite, well, that’s part of the problem. We’ve gotten so used to this tit-for-tat, knee-jerk argument, we’ve lost the point. Do we want to win the fight or fix our problems? We’ve been trolling each other for four years, thanks to the troller-in-chief, and that has to stop.

Here’s part of the oath that President Biden will swear tomorrow: “I will support and defend the Constitution of the United States against all enemies, foreign and domestic.”

We are not the enemy, you and I. We’re Americans.