We lost a member of the family on Monday, but the only people who saw us cry were there when he died. We didn’t tell friends or clients. Graeme went to a meeting that afternoon. I cleaned out the garage. The fact that our hearts were broken, we kept to ourselves. We didn’t want to look silly. It’s not as if we lost a child or something. Leo was only a cat. 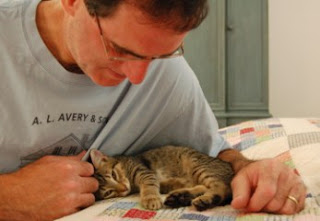 He was a handsome boy, an athlete, a trickster. He was the one who broke Aunt Ruby’s lamp, though he tried to blame his sister. He liked lasers and hide-and-seek. Hated thunder. He was shy around strangers, but deeply affectionate with those he loved. He often woke us at three in the morning, looking for comfort. We called him “Buzzer” for the noise he made in the dark. He was allergic to everything, needed prescription food. We justified the expense by saying, “At least we don’t have to send him to college.” Later, he developed asthma, which required monthly shots. He even submitted to acupuncture. My dad shook his head and said, “How many new cats could you have bought?”

We just wanted to keep him with us a little longer. Eight years weren’t enough. We knew the day would come when he was too sick to fix, and we’d make a gut-wrenching decision, and drive to the vet, and sign some papers, and watch him take his last breath on a metal table.

It was as awful as I imagined.

I’ve been walking around for a couple of days, reminding myself not to look for him. It was my afternoon ritual to find his sleeping spot, lay down in the sun beside him and listen to him purr. It gave me such peace. Try and put a price on that. We still have his sister, Lily, but she doesn’t need us as much. I’m glad she’s here, but God, I miss her brother.