I wonder how many men saw the #MeToo hashtag and thought, What are they whining about now? That’s the joke, right? Women—we’re never satisfied. Always complaining. No matter how much you give us, we want more. Unreasonable things, like equal pay for equal work. Control over our own bodies. Freedom to walk down the street without being attacked. Who do we think we are?

If the women in your life seem a bit touchy lately, it isn’t PMS. (Haha. Yeah, guys, that joke is still funny, a million times later.) No, they may be suffering from something closer to PTSD. The Harvey Weinstein story brought up memories many of us would’ve gladly left buried. Painful, embarrassing stuff. The sad part is, we always thought it was our fault. Something we did. The way we walked or acted or dressed. There’s a shame attached to these experiences that’s hard to shake. It wrecks your confidence. Makes you second-guess yourself. Maybe that’s why men do it. To keep us in our place.

This week, these memories floated up for me like smelly bits of trash: 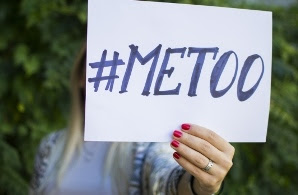 First ride on a subway, packed in like sardines. Suddenly, a hand between my legs. “Groped” would be the word. I couldn’t move. Couldn’t even turn to see his face. Later, a friend explained, “Just some guy copping a feel.”

Working as a waitress at Howard Johnson’s. Men older than my dad patted my butt, eyed the fit of my uniform, asked when I got off work. I was 16. They expected me to be flattered. The boss was always after us to smile, be nice. All part of the friendly service. One of the other waitresses made the mistake of being too nice to a customer, and then, he came in every day and stared at her from the corner booth. The cook had to walk her out to her car at night. On the bright side, he tipped well, her stalker.

A few weeks into my new job at HBJ Publishing, meeting with the VP. I was nervous. He’d been with the company for 25 years. If he liked you, you were going places. “Want to hear a good joke?” he asked. “Sure,” I said, feeling like a grown-up. He leaned closer. “What’s the difference between a gang-bang and a clusterf*ck?”

To this day, I can’t remember the punchline.

But what’s the big deal? Nobody got hurt. There was nothing physical, no assault. It was just locker-room talk. As someone in HR once said, “If you want to work in a man’s world, you’d better learn to speak the language.” Over the years, I toughened up. There wasn’t much that could shock me. I learned never to be alone with certain people, like the VP. So many women complained about him, he was sent to “sensitivity training,” not once but twice. He learned to lower his voice when he asked my boss and me for a threesome. I think he was joking. Anyway, we laughed. That’s what we did—laughed when it wasn’t even remotely funny. And then, we went home and took a long, hot shower.

We just wanted to do our jobs. Was that too much to ask? We wanted to be judged by our work, and not our boobs or the length of our skirt. (Once, the VP actually told us where we ranked in the departmental order of breast size.) Later on, I discovered there was something worse than a boss who wanted to sleep with you, and that was the one who thought women were too stupid to vote. You know the type: always interrupting, always shooting you down, until a guy made the same suggestion, and then it was genius. That boss finally drove me into therapy. My hands would shake before meetings. You never knew when he might take you apart in public. The company sent him to anger management, also twice. He’s been promoted three times.

In all the places I ever worked, there was never any serious consequence for a man who bullied, harassed or intimidated female employees. He rose through the ranks. It was the women who quit. If they mentioned his name in an exit interview, nothing ever happened. The rest of us learned to keep our mouths shut.

I hope those days are gone. Millions of women have responded to the #MeToo campaign. The secret’s out. We used to talk about assertiveness training for girls. Now, let’s focus on teaching boys to be decent human beings. Here’s a tip: When you whistle at a woman on the street, she has to make a quick mental calculation: harmless jerk or potential rapist? Try wearing a sign.

Fortunately, I’ve known many fine, decent men in my life—I’m lucky enough to be married to one—so I guess I’m asking for their help. Teach your brothers how to be men. Don’t put up with their bad-boy behavior. Show them that every person deserves respect, regardless of race, creed, or gender. Maybe one day, a woman can feel safe leaving her drink on a table, or walking down the street, or maybe, just maybe, applying for a job. A girl can dream, can’t she?
at October 22, 2017